Travel from ancient Persia to Greece, to age-old India and to the Spring & Autumn Period. Meet Greek philosophers and Persian kings, Buddha himself, Jain leaders, the founders of Taoism and Confucianism. This wandering tale of philosophical ponderings and historical happenings takes us across and through our great Axial Age, and in the end brings us back to Persia and Greece.

a book review by Gregory

If you could meet any three historic personages, who would they be?

We are in Athens on the evening of Dec. 20, 445 B.C. Cyrus Spitama is outlining his response to Herodotus. Democritus, Spitama’s nephew, is taking dictation.

History is just the tales we choose to tell.

Herodotus (484-425 B.C.) was a great spinner of stories, more interested in telling a tall tale than in any concept of “fact” or “truth”, perhaps much like Gore Vidal himself. Herodotus’ “The Histories” (c. 440 B.C.) is one of the first accounts of the Greco-Persian Wars (499-449 B.C.) when the Achaemenid Empire put a few uppity ancient Aegean city-states in their place. According to Cyrus Spitama, Herodotus made up most of his stories, and what he didn’t make up, he truly misunderstood. So Spitama takes it upon himself to correct Herodotus. Thus begins Gore Vidal’s 657-page grand tale “Creation” (1981), a wandering adventure through the great happenings and people of the Axial Age. 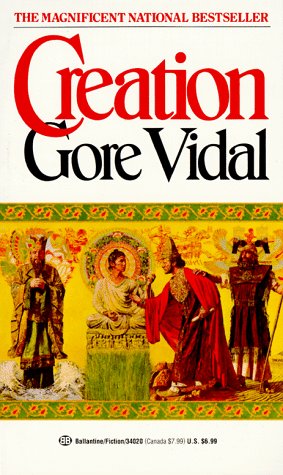 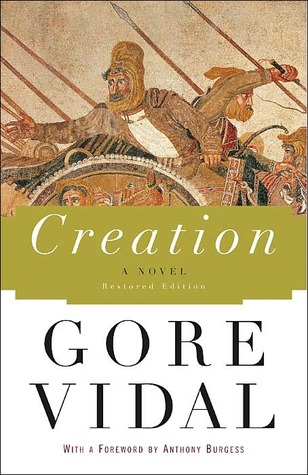 There’s very little of the dramatic in “Creation”. It has relatable characters, sure, but each is simply one-dimensional. There’s very little plot, no nuanced protagonists and no character arc. Nonetheless, it’s still a grand journey into our past. It is long, stylish and dense. Some parts offer more-likely alternative versions to the commonly-accepted versions of history. Some parts recreate or invent backroom politics of ancient empires. Some other parts debate existence, theology and the meaning of life, the universe and everything (42). This is all held together by an un-formed, fairly random, sequence of historical events and historic personages: events that are recorded as actually having happened, and momentous and remarkable personages, strung together into a tale.

Gore Vidal (1925-2012) himself could be seen as a Herodotus for today’s U.S. Like Herodotus, he spoke out in our modern-day Odeon: online, in books, the speaking circuit and in the press. For example, Vidal’s seven-volume series of U.S. histories are just as fictional as Herodotus’ works, and just as accurate as real history. Beyond the U.S., however, Vidal has also written “Julian” (1964) about Roman Emperor Julian the Apostate (r. 360–363), and this book in 1981, “Creation”, about the Axial Age.

What is the Axial Age?

The “Axial Age”, Achsenzeit in German, goes from about the 800s B.C. to the 300s B.C. and covers the West (Aegean, Marmara; Tigris, Euphrates), India (Indus, Ganges, Brahmaputra) and the East (Yellow, Yangtze). The concept of this era was first explored by a German historian in the 1950s. Please turn to page 2 of “The Origin and Goal of History” (1953) by Karl Jaspers.

The most extraordinary events are concentrated in this period. Confucius and Laozi were living in China, all the schools of Chinese philosophy came into being, including those of Mozi, Zhuangzi, Liezi and a host of others; India produced the Upanishads and Buddha and, like China, ran the whole gamut of philosophical possibilities down to skepticism, to materialism, sophism and nihilism; in Iran, Zarathustra taught a challenging view of the world as a struggle between good and evil; in Palestine the prophets made their appearance, from Elijah, by way of Isaiah and Jeremiah to Deutero-Isaiah; Greece witnessed the appearance of Homer, of the philosophers — Parmenides, Heraclitus and Plato — of the tragedians, Thucydides and Archimedes. Everything implied by these names developed during these few centuries almost simultaneously in China, India, and the West, without any one of these regions knowing of the others.

“Simultaneously in China, India and the West, without any one of these regions knowing of the others.” This is what Gore Vidal ties together with this novel: he lets these regions know of the others. This is the era in which Cyrus Spitama lives. It is he that ties together Socrates, Buddha and Confucius. These three were real people who lived, breathed, ate, loved and thought, just as we do. Today, we may have placed them on a pedestal, but for Cyrus Spitama, they were real people.

Vidal’s Spitama is an ambassador for the Achaemenid court. This diplomat visits the Peloponnese, Athens and Thrace (today’s Bulgaria and Greece); Sardis and Miletus in Lydia (today’s western Anatolia); Babylon, Ecbatana, Persepolis and Susa in Persia (today’s Iraq and Iran); Bactra in Bactria (today’s Afghanistan and Turkmenistan); the 16 Mahajanapadas, like Magadha (in today’s Uttar Pradesh and Bihar); and he even visits far-off Qin (秦) (Wei River, near Xian), the trio of Han (韓), Wei (魏) and Zhao (趙) (Yellow River, Henan & Hebei, Shanxi & Shaanxi), and Qi (齊) (Shandong) and Chu (楚) (Yangtze River), too. Clearly fantastical, author Vidal nonetheless uses this make-believe ambassador to look with a modern eye at our Axial Age and at ourselves.

“Those who cannot remember the past, are condemned to repeat it.”

There’s a lot of “us” in the past, and Vidal brings it all to life. Perched in his multi-tiered, cliff-top mansion along the Amalfi Coast in Ravello, Italy, just south of Naples, Gore Vidal typed out page after page of this in the late 1970s, carefully crafting this novel between his trips back to the Northeast U.S. for speaking tours.

In the West, the character Spitama is eye-witness to the backstabbing, warring city states of the Aegean and to the peace and civilization brought by the Achaemenids. In India and China, Spitama’s experiences veer toward the philosophical. In Magadha (southern Bihar), he meets Gautama Buddha (c. 480-400 B.C.), who lived along the banks of the Ganges. Also in the Mahajanapadas, he meets the naked wandering ascetic Makkhali Gosala (b. 484 B.C.), who also lived and preached along the Ganges, as well as Mahavira (497-425 B.C.) and his disciples. Across the mountains and desert, Spitama meets Confucius (551-479 B.C.) between the Yellow and Yangtze rivers, in today’s Shandong and Henan, and many of his disciples, and is eye-witness to the Spring & Autumn Period (771-476 B.C.) as it becomes the Warring States Period (475-221 B.C.). 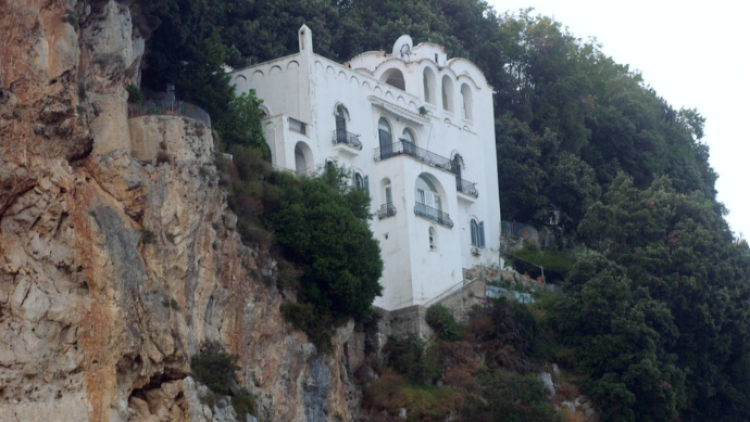 (For the first time there were philosophers)

Philosophically speaking, Vidal’s writings in this book are superficial. Vidal is not a philosopher, and the author doesn’t delve deep into philosophical matters. Something like “Sophie’s World” (1991) by Jostein Gaarder, “The Alchemist” (1988) by Paulo Coelho or even “Who Moved my Cheese?” (1998) by Spencer Johnson might be better consumables for readers interested in a diet of pop-philosophy.

What Vidal does offer here, however, is historical accuracy. He re-creates an ancient world. Like the book “I, Claudius” (1934) by Robert Graves or the TV show “Rome” (2005-2007) on HBO, Vidal gives us a chance to travel back in time. We travel with Spitama as he visits the ancient Aegean Sea, the Achaemenid Empire, Magadha and across the desert and mountains to Qin, Qi, Tian, Wei and other East Asian polities. “Creation” is a great historical travel adventure. 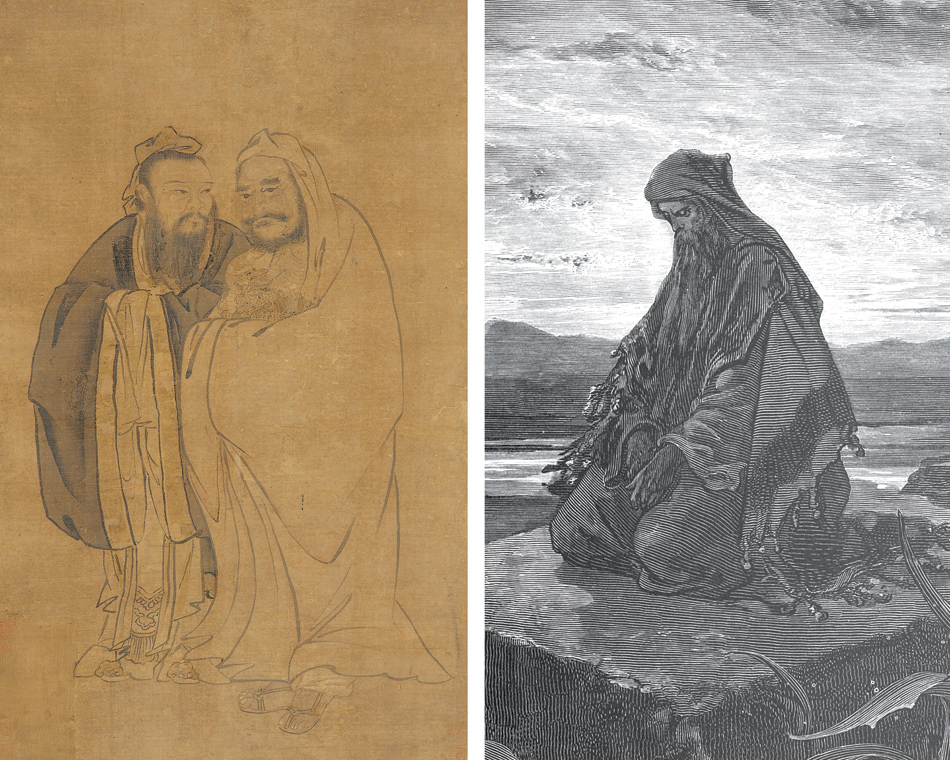 “The past is a foreign country: they do things differently there.”

The problem with history is that it’s us who write it. We’re often wrong, and we’re always biased. We know that A and B occurred at the same time, but we don’t know if A caused B, if B caused A, or if there’s an unknown variable — C — that caused either A or B, or both, or neither. Correlation does not imply causation, and we can’t prove a negative. Was there actually an Axial Age? Did our development as humans “just happen” at around the same time at different places? If agriculture could be arrived at independently in various locations around the globe, why not philosophy?

Also, if Persia-Greece, Uttar Pradesh and the Spring & Autumn Period are so exciting, do we have to assume that nothing was happening at that time in, say, Russia, Scandinavia, Northern Africa, Southern Africa, North or South America, or, in fact, Europe itself, outside of the southern Balkan Peninsula and Anatolia? Maybe we just focus on the West, India and China because we’re from those areas. We have no proof that there were any connections between Isaiah, Socrates, Zoroaster, Buddha or Confucius. Spitama is a fiction. Like agriculture or writing, it’s probable that we just developed this way independently in different regions. Does this make it an official “age”, or just normal human development?

If you want to separate the Americans from the Canadians, just ask when they celebrate Thanksgiving.

It is these mental boundaries that create us, and “Creation” helps us to realize just how silly, and yet oddly resilient, they actually are. Our imagined communities and invented traditions can be stretched, but not always completely re-imagined or re-invented. We pick and choose from history, steered by what we learned at elementary school and by what we absorbed from TV or Instagram, but society doesn’t always let us switch from being one to being the other. This forms the prisons inside which we choose — or are forced — to live. By reading “Creation”, however, you can begin to stretch your prison walls, if not actually break out.

Especially in the U.S., we see ourselves as the inheritors of the British Empire, itself having received its mantle from the Roman Empire, and it, in turn, having taken the mantle from Ancient Greece. Rarely does this Anglo-Saxon Caucasian male striding across the Earth, Manifest Destiny at his back, stop to consider the Achaemenids, the great Magadha thinkers or the lands of Chin, Lu or Zhou. “Creation” reminds us of these people and reminds us that we’re not alone.

It reminds us that we are all but children of the Axial Age. 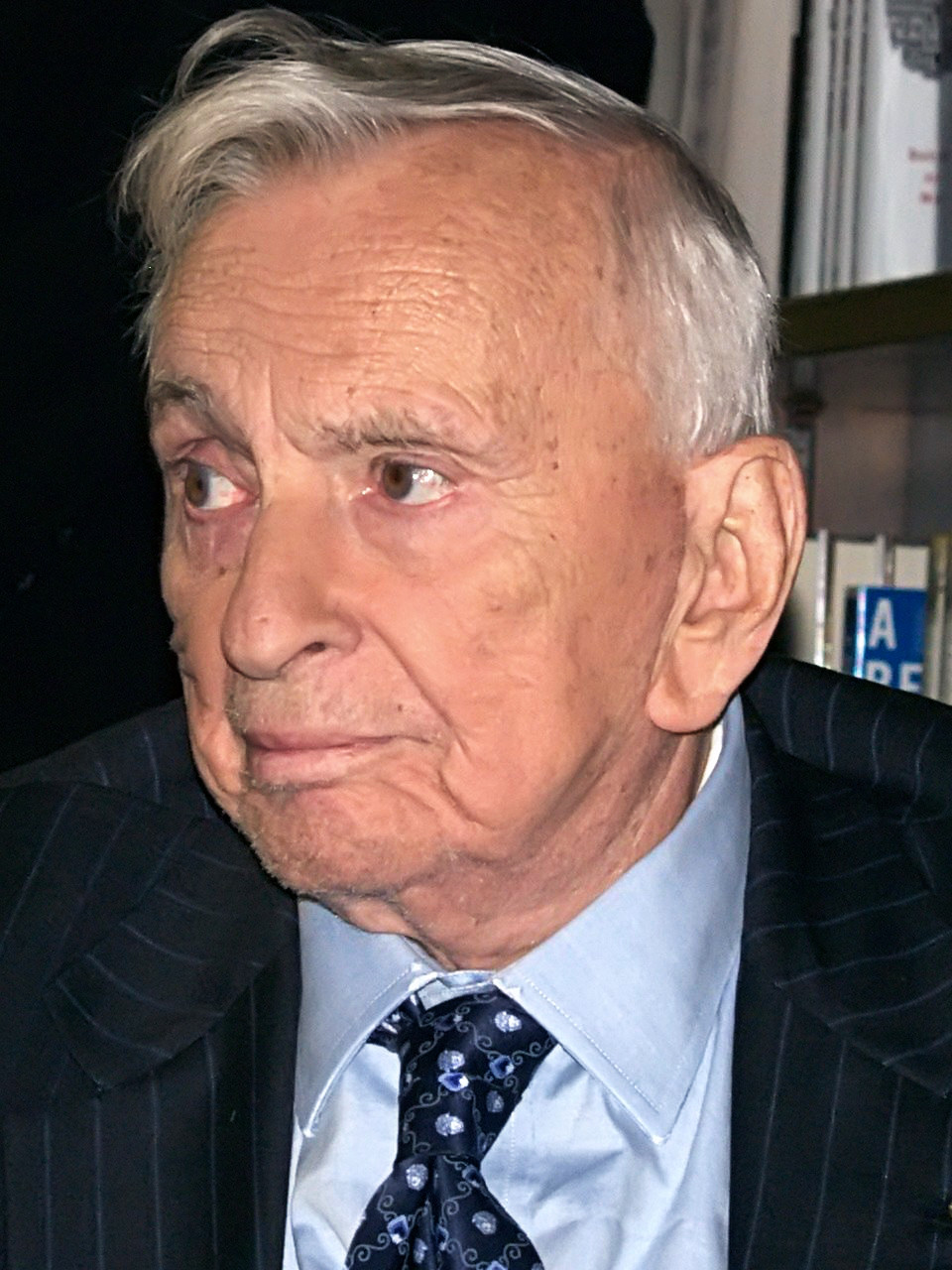 In conclusion, I would get “Creation” at your local library and read it off and on over a month or so. You might have to renew it at least once. It’s not a read-through-in-one-sitting novel. It has a lot of space in the text– space for you to read, learn and expand — and it wanders, both geographically and in terms of plot. It’s a story to which you can come back once or twice per week, as you peruse other novels in your spare time. Enjoy your time in the past and enjoy the world that author Vidal creates in the pages of “Creation”.

[1] One could argue that the National Park Service, the Interstate Highway System and the Federal Reserve System are also physical ties that bind.

[2] And maybe the CBC. Or healthcare.