The Puritans in Massachusetts in 1630. The Mormons in Utah in 1847. The Bolsheviks in Russia in November 1917. The Communists in the USSR in April 1922. The Blackshirts in Italy in October 1922. The Wahabis in Saudi Arabia in September 1932. The Nazis in Germany in January 1933. The Falangists in Spain in April 1939. Hoxha in Albania in October 1944. Kim IlSeong in North Korea in September 1948. The Communists in East Germany in October 1949. Mao in mainland China in May 1950. Ceaușescu in Romania in March 1965. Al-Assad in Syria in November 1970. Pol Pot in Cambodia in April 1975. The military in Argentina in March 1976. The Sandanistas in Nicaragua in July 1979. Saddam Hussein in Iraq in July 1979. Xi Jinping in mainland China in March 2018. What will you do when they come to power? What will you do for a job in the new regime? What will you do when they knock on your door at 3 a.m.?

The economy, education, art, science, one’s private life, the clothes you wear, your morals, your sex life, even the way you think: everything is within the state. The official ideology penetrates into the deepest, most intimate nooks and crannies of our lives. There is complete control over every citizen’s thoughts and actions. The whole population is mobilized in pursuit of these goals. This “totalist” ideology is enforced by a secret police and a monopoly on violence, a monopoly on industry and a control of the masses. They present a comforting, single answer to the mysteries of the past, present and future, to the nuances of life. They mobilize the entire population in support of one, single, official state ideology. They do not tolerate any activity that’s not directed toward the goals of the state. A middle-aged or elderly man — always a man — is the purported leader, a symbol for the masses. There’s personal repression. There’s state control of business, unions, non-profits, churches/ temples and political parties. Many academics have verbalized the concept of totalitarianism, and many other authors have written about it, but it takes an author like Margaret Atwood (b. 1939) to really show us what it means.

She’s 78-years-old these days and has written 17 books of poetry, 16 novels, 10 non-fiction books, eight collections of short fiction, eight children’s books and one graphic novel; or, as another tabulator puts it, she has written 20 volumes of prose fiction, 13 volumes of poetry, six works of nonfiction and six children’s books. Regardless of the exact statistics, “The Handmaid’s Tale” (1985) is her most read and most shocking. It’s raw and visceral, as true and apt in 1985 as it is today, 33 years later. Written at least partially while residing in West Berlin, peering over the Berlin Wall, it won the Governor General’s Award in 1985, the inaugural Arthur C. Clarke Award in 1987, it was nominated for the Nebula Prize and the Booker Prize in 1986 and for the Prometheus Award in 1987. It was made into a movie in 1990, an opera in 2000 and a 10-hour TV miniseries in 2017. It is a truly shocking tale, a tale that no man could write.

It wouldn’t even occur to a man to write this. Only a human who could be subject to rape could write this. A human who could commit rape would never even conceive of such a novel, and every man is conscious of his ability to commit rape, even if only in the darkest corners of his mind. Luckily, most of us are properly socialized. However, like some unneeded appendix or tailbone, a leftover of our brutal evolutionary past, the ability to rape another human still exists deep in our male triune lizard brain.

In Atwood’s tale, a totalitarian state has taken over the U.S. northeast. Thirteen stripes of red-faced white Christianity have reared an ugly head, blue veins have popped out of the neck, and 50 spackles of spittle hang in the corner of the mouth. The mere lies of a normal religion have become the dark mechanisms of complete state control over all aspects of life. Sumptuary laws dictate what you wear, and the women have to wear color-coded burqas. A tiny upper class rules over the masses. Everyone is assigned a tier in the new social order. Men are on top, of course. Environmental damage has savaged the Earth. Pollution, both chemical and nuclear, is everywhere. Infertility has set in. Almost no one gets pregnant, almost no one can have babies. Lower class women known to be fertile are assigned to infertile upper class men, who are married, of course. The wife is the wife, but the rape of the lower class women is institutionalized, regulated and formalized.

The most terrifying aspect of Atwood’s world is that it’s all real. It’s not real in the sense that the U.S. northeast is Hell, though that’s plausible. It’s real in that everything she describes in her book has happened in real life. Totalitarian states have used sumptuary laws, have classified all citizens into strict social tiers with visible identifiers, have taken away babies and given them to families of the well-connected upper classes, have controlled women’s bodies, with men telling women what to do. We have all done all of this. 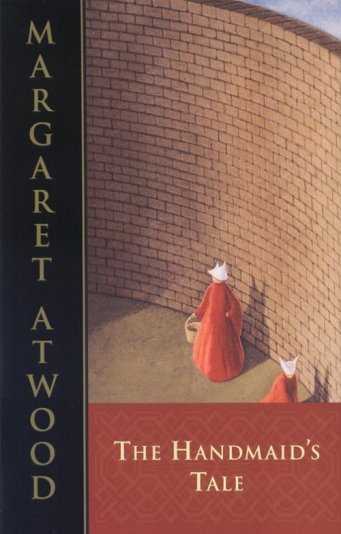 “The Handmaid’s Tale” has gone through many editions since being first published in 1985.

In the 1800s in the U.S., Canada and elsewhere, women were treated like children: they were not allowed their own agency and they were given no moral decisions. Today, that would be as if women owned no property, had no credit cards, no cell phone contracts, no access to higher education, had no control over their own reproduction, and couldn’t vote or read. This has happened in North America before, too. Of the three broad blots on European-America’s relentless trek across North America — slavery, the treatment of the First Nations, and radical-fascist Protestantism — the Puritans were as close as we’ve ever come to a totalitarian state.

Today, the second-tier state of Massachusetts is merely home to North America’s 13th or 14th largest metropolis, the smallish city of Boston and its surroundings. However, in the late 1600s, Massachusetts was home to the Salem witch trials. People were guilty before they were accused. The rules of evidence were thus that you could not be found innocent. You were guilty because you were accused. Welcome to European-America as seen through the eyes of anyone who’s not of European descent and who’s not male.

This — all of this — combined with toxic Christianity and poisonous male-ness, comes to rule over Gilead, the name of Atwood’s totalitarian country. The aim of any totalitarian ideology is to eliminate ambiguity. Everything is black or white, 1 or 0. In all forms of religious fanaticism, there are so-called “spiritual needs”, where humans seek simple black:white explanations for physics, chemistry and the other sciences. Individuals are segregated by category and forced to dress according to their social function. Dress codes and sumptuary laws impose social control and help to distinguish people. Welcome to Gilead.

Thrown into this world is our hero. She struggles to retrieve the family she had before Gilead took over. Through flashbacks, we see each step of the way, how coup d’état becomes one-party state becomes totalitarian dictatorship. Many of these steps can be seen today: tell the uneducated populace they’re under attack, promise a simple solution, blame the Other. Go watch Kenneth Johnson’s 1983 TV miniseries “V”. He shows how it’s done.

The family is just about the oldest of human institutions. As our hero seeks her family, we see the many ways in which nationalist or totalitarian governments transform, distort and usually destroy the family.

Concerning the family, as The Economist says, “Ataturk was an appalling husband, an emotional cripple who spent the first night of his honeymoon drinking with his male friends. Stalin, abused as a boy, persecuted his own family. Mussolini’s loveless home life was as shallow and ramshackle as his regime. The Goebbels family was apparently the epitome of cloyingly sentimental Nazi values. But its fate was macabre. The parents killed six of their seven children and then themselves in Hitler’s bunker as the Third Reich collapsed.”[i] Nationalist, authoritarian or totalitarian families are rarely happy.

Since the 1970s, author Atwood has warned us about corporations, biotechnology, greed, sexual mores, rising fundamentalism, right-wing crazies, loony lefties, science-gone-wrong, pollution of the environment, fundamentalist religion, misguided technology, degradation of the environment, cruelty to animals and teenage angst, among other things. This was most graphic in 1985 with “The Handmaid’s Tale,” but it also continued with other Atwood dystopias, all chilling and post-apocalyptic, like “Oryx and Crake” (2003) or its continuation “The Year of the Flood” (2009).

Robert McKee famously spoke to us through Kaufman in 2002. “Wow them in the end, and you got a hit. You can have flaws, problems, but wow them in the end, and you’ve got a hit. Find an ending, but don’t cheat, and don’t you dare bring in a deus ex machina. Your characters must change, and the change must come from them. Do that, and you’ll be fine.”

Not to nitpick Atwood, but her ending raised eyebrows. I laughed out loud, certainly, almost yawping with glee, but it also raised eyebrows. I can’t tell if the ending is the best in the world, or the worst. She almost dips her toe into the “and then I woke up” wrap-up that authors sometimes use, but she is saved by being just on this side of the fantasyland line. I suppose the mark of a true auteur is knowing exactly where that line is.

As we look through Atwood’s eyes into our future we must first return to the past, to the original English-language novel, to Geoffrey Chaucer (1343-1400). In his “The Canterbury Tales” (c. 1387), we begin with the Knight’s Tale, the Miller’s Tale and the Reeve’s Tale. We make our way through his 17’000-line tale and we end with the Yeoman’s Tale, the Manciple’s Tale and the Parson’s Tale. We now have one more chapter to add to our ever-expanding bridgespan of English-language literature: the Handmaid’s Tale.

tl/dr: Read it. It will terrifyshock you; of what we are capable. It’s a gripping yarn, and Atwood’s best read. It’s also a good introduction to existential/ totalitarian literature.

[i] “Behind closed doors — families and totalitarianism. A thought-provoking study of family life under pressure”. The Economist, Jan. 22, 2015.