The hajj & freedom for religion

Today is Friday, Aug. 24, 2018, and pilgrimage season once again comes to a close. So it’s time to reconsider a serious possibility. The case could be made that Mecca, Medina and perhaps other locations should be their own country.

There’s no reason in Islamic law or in the words of Muhammad that you need the men in the Saud family to be in control of the religious sites. Keep Riyadh as the Saud family’s capital and playground. Let them keep the oil money coming out of Dammam (which is Shiite and not very Saudi at all, and should be joined with other Shiites in what we now call Iraq, but that’s another question for another time), but make Mecca a free and independent religious country, free from the corrupting Saudi shackles. Give religion its freedom. 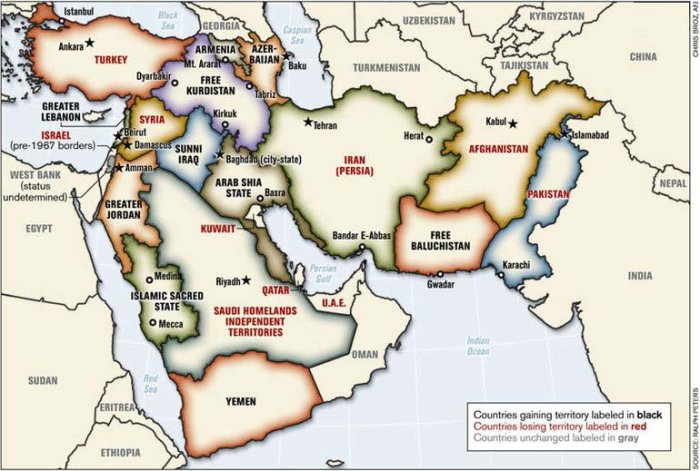 Ralph Peters wrote an article in the Armed Forces Journal in 2006. This is his map.

First, the hajj makes a lot of revenue for the Saud family. I’m not sure about profits, mind you. It’s quite an expense to host the hajj: hospitals, hotels, bathrooms, drinking water, security, crowd control, prosecuting all the cases of sexual harassment that occur during the hajj, et cetera. There were 1.7 million foreign pilgrims in Mecca this week. There might be zero profits. However, it certainly brings in a lot of revenue. So that’s one reason why the men in the Saud family wouldn’t want to give up their custodianship.

However, the men in the Saud family don’t matter. We must think Islamicly here.

Billions of Bosnians, Thracians, Lydians, Anatolians, Turks, Persians & Iranians, Urdu-speakers, Pashtuns, Tajiks, Hazaras, Uzbeks, Kazakhs, Uyghurs, Han Chinese & people in Xinjiang, Punjabis to Gujaratis to Bengalis, people in Jammu and Kashmir, Assam, Kerala, Uttar Pradesh and Bihar, Chadian and Malian, Sudanese and South Sudanese,  people from Aceh to South Sumatra to Kalimantan to Mindanao, from Brunei and from Madura, Javanese, and even the Ismailis… all of them, men and women, and all the others… they are not Arab. They are not even closely Arab, and they’re certainly not Saudi.

Why should an out-of-date, male-dominated regressive desert-bound Arab family be the custodian of the holy sites? Give religion its freedom.

If I were Saudi and in Saudi Arabia, I’d probably be locked up for typing this. That, in itself, is reason enough why the men in the Saud family should not be in charge of any type of religious holy sites. Keep those guys well away from religion, and let the religious people rule themselves in their own little religious country, built specifically to help its adherents go on their pilgrimage.

Or, perhaps better, just do away with religion all together.

Like Loading...
‹ “The Handmaid’s Tale” (1985) by Margaret Atwood
tl/dr: Korea is small and dense, and has a very active government. ›